A short-cut to forming effective habits 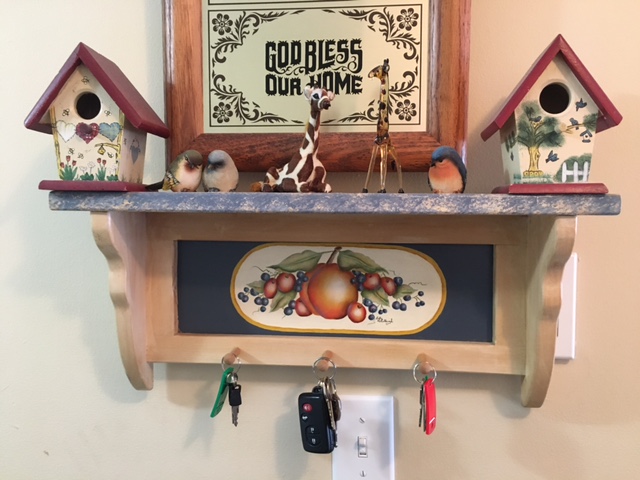 Over 30 years ago, I had a bad habit of tossing my car keys on the kitchen table when I came home at night.  Invariably I wasted time searching for my keys in the morning since they seldom stayed on the table. To solve my problem my wife bought me a key rack to hang on the wall just inside the front door. Then, I had to form the habit of not tossing them on the table, but instead, hanging them up as I entered the house. But the habit of walking into the kitchen and tossing them on the table was firmly ingrained. I continued to do so. I would walk by the key rack without even noticing it. And, I would resolve to remember next time, and the next time, but I never did.

Then, I recalled reading in Maxwell Maltz’s book, Psycho-Cybernetics, that a habit is an unconscious behavior.  How could I change a behavior when I was doing it unconsciously?  I ignored the key rack and walked right to the kitchen table from habit, because I had done it so often before. That is how habits are formed – by repetition. But how does one break a habit?

Well, Maltz said that to form a new habit you must act out the new behavior you wanted to acquire. Again, and again.  In other words, whenever I tossed the keys on the table, instead of leaving them there, I had to pick them up, retrace my steps, and hang them on the key rack.  An investment of time to say the least. And persistence.  Because day after day I doubled back to hang up my keys. All this activity sure brought it into my consciousness. But did I have to continue doing this for about a year or more?!

It was then that I accidentally discovered something that only recently has been proven to be an effective way of developing a habit. It is recorded for posterity in a video of me acting it out in a seminar over 20 years ago. Originally, people thought it took 21 days to form a new habit. (A misinterpretation of Maltz’s research.) Then, more recently, it was shown that it varied from 18 to 254 days, with an average of 66 days. Even more recently it was proven that habits are formed based on frequency, not time.

James Clear makes this clear (pun not intended) in his book, Atomic Habits. To quote, “It doesn’t matter if it’s been 21 days or 30 days or 300 days. What matters is the rate at which you perform the behavior. You could do something twice in 30 days, or 200 times. It’s the frequency that makes the difference.”

That proved why the crazy thing I did at the time worked. Every time I walked into the house, forgetting to hang up my keys, I not only picked up the keys and returned them to the rack; I immediately did it again, 15 or 20 times, walking back and forth from the key rack to the kitchen table, again and again, reenacting the identical activity until either my wife or kids insisted that I stop. It took only a matter of days to form the new habit of hanging up my keys.

Try it. For example, if you want to develop the habit of taking off your boots before you walk into the house, put your boots back on, go back outside, and do it again and again Don’t wait until the next afternoon to repeat the process. It’s a pain in the neck, and that’s why it works. I maintain that you are sensitizing your mind to that activity, so you won’t forget to do it the next day or the next. Your mind is certainly not normally focused on taking off your boots or hanging up your keys or whatever. This repetition brings it to the forefront.

I’ll give you another example of how I sensitized my mind to a bad habit. This happened when I was first starting to speak professionally, and I asked my wife to sit in on part of my workshops and critique my delivery. It was difficult for me because I am what psychologists might refer to as a “highly sensitive person,” and don’t take criticism well. After the first session she attended, she delivered the compulsory comment, “You did a great job,” but then came the more critical, “but you are always using the expression, ‘that type of thing.’” Most of your statements end with ‘and that type of thing.’”

In public presentations, I never used that expression again. As I was about to say it, I would always stop myself in time. And eventually, it disappeared from my vocabulary. That’s what your brain does for you. Once you develop a new habit, the old one fades away from disuse.