A few of my favorite time management books 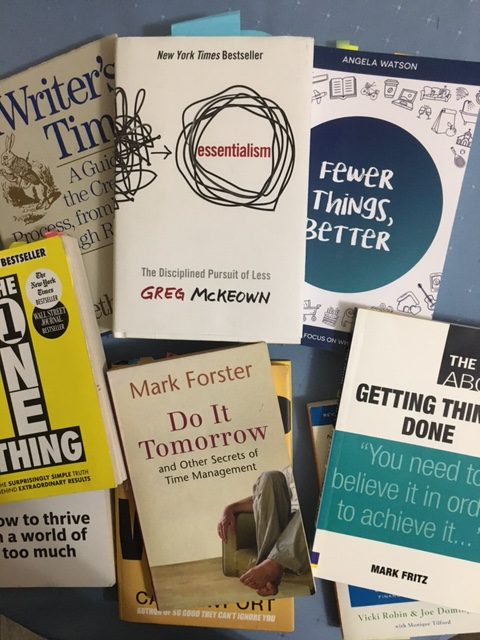 I’ll mention Stephen Covey’s 1989 classic, The 7 habits of highly successful people, which seemed to me to be one of the first books to take a holistic approach to time management. It is a “must read” of course, but I want to get to the more recent books, which may not have received the visibility that they deserved. These later books were the source of many of my ideas. The most practicable ideas from Covey that I still recall were such suggestions as begin with the end in mind and sharpen the saw. Probably most of us were already aware of these fundamentals, but sometimes the impact of an idea is determined by how it is expressed. And Covey was a master at expressing an idea with crystal clear clarity.

Here are a few other books that I found valuable.

2006, Do it tomorrow: And other secrets of time management, by Mark Forster. Have you ever flipped through a book that you had read ten or more years earlier and immediately remembered exactly where you were when you had first read that book? If so, I would suggest it is a book with many highlighted passages, asterisks, and handwritten notations. At least that’s my experience. One of the many “aha” s in the book was Forster’s explanation of “busy work” vs. “real work.” I have no other book with so many handwritten notations. It was an inspiration for over a dozen articles. And I vividly recall those mornings at a coffee shop at St. Pete Beach in Florida, reading this book and making notes as I did so.

2008, The truth about getting things done, by Mark Fritz. Not to be confused with several other books with similar titles. It’s refreshing to read a book with brief chapters, (38 in all) all of which make a valid point. For example, Fritz makes the point in one chapter that it’s useless to try to use logic and facts to argue a point with someone who is emotional. You must deal with the emotions first. I notice I had written on one of the pages, “You cannot reason with a person who has lost his reason.” (I think it was a statement I had read in a book on working with Alzheimer’s patients.)

2013, The one thing, by Gary Keller. I loved this book for its chapter on multitasking. Never a clearer, succinct, and truer description of this illusion has ever been written.

2019, Fewer things better, by Angela Watson. Written by a teacher for teachers, this book has universal application. It inspired me to write a book on boundaries, because as Angela Watson claims, there’s an unprecedented number of things competing for our attention. Boundaries protect our time. You don’t have to be a teacher to profit from reading this book.

2020, Essentialism: The disciplined pursuit of less, by Greg McKeown. For me, this book was filled with ways and reasons to say no, even to myself. And I thought I had heard them all. Essentialism involves doing, accepting, keeping, using, and so on, only what is essential. For example, when decluttering, and we want to keep high-value items that we no longer use, ask yourself the question, “If I didn’t already own this, how much would I spend now in order to buy it?” That worked for me.

There are many other books that I particularly enjoyed reading, but almost any book on the topic you love should bring big rewards if you maintain an open mind and a searching attitude. If you don’t see an idea that has a direct application to your situation, let it be the catalyst in developing an application of your own.

And remember, there is power in reading.