Do you really need a “Junk” drawer? 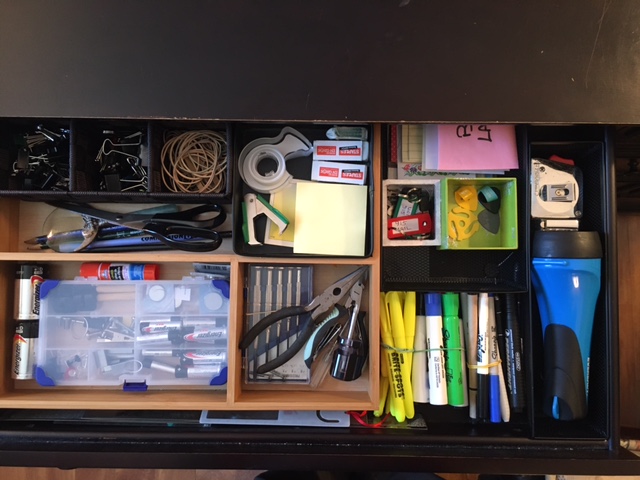 There was an interesting study done by Joybird, a custom furniture company, on how Americans organize their homes.  It involved a survey of 1900 people who were asked among other things, how often they organized their homes.  Responses indicated that 48.1% of them tidy up their home every week, 17.1% every two weeks, 19.3% once a month, 6.5% every other month, 6.1% every six months, 2.4% once a year, and 0.5% never.

But what was conspicuously absent was the option of “all the time,” which to me would have been a popular choice.  At least it is one I subscribe to, and seems to be the easiest, most efficient, and most proactive way of keeping on top of your work or housekeeping.  To quote Mark Forster, in his book, Secrets of Productive People, “being on top of your work gives you a sense of energy and flow.  Being behind causes stress, and results in exhaustion, burnout, and depression.”

Personally, I would rather make the bed when I get up, stick the dishes and a dishwasher after I eat, and make the school kids lunches before I go to bed the night before.  I could straighten out the kitchen while my meal was cooking, clean the bathtub while I was taking my shower, and wipe out the basin in the morning after I washed my hands. It would be easy to clean the kitchen sink while the kettle boiled and relax with my coffee as I listened to the news.

If people were proactive, they would stop for gas when it was convenient, not when the gas gauge was showing empty.  And they might have time to check the tires while they were there.  When shopping, they could buy two of frequently used, but non-perishable items and buy another one at their convenience after the first one was used. It is the same principle with office supplies.  They should never run out of sticky notes, printer paper, staples, pens, glue stick, batteries, light bulbs and so on

At night they could select the clothes that they wanted to wear the next day instead of leaving the decision until morning when they are still half asleep and rushed for time.

And of course, the more stuff they have in their home, the harder it is to keep orderly, whether clothes, jewelry, or what ever. I have a rule that when I buy something, such as a new sweater, I get rid of an older one.

Another thing asked of the people in the survey was to list all the items that were in their junk drawer.  From the results, they selected the 10 items mentioned most frequently.  In order, they were tape at 55.4%, pens at 54.8%, spare batteries at 53.1%, scissors at 50.7%, flashlights at 44.6%, glue at 43.6%, paper clips at 38.8%, matches at 37.0%, rubber bands at 36.0 percent, and keys at 33.1%.  As far as I know, they failed to note how many items in total were in those junk drawers, but I wager they were in the dozens.  And if they were all jumbled together, as a “junk” drawer might indicate, I imagine there would be time wasted rummaging through them whenever they needed something.

If people placed an organizer in the drawer to hold those top 10 items, they could save a lot of time and frustration over the years.  The accompanying photo shows how my center desk drawer is currently organized, and yes it contains the 10 items, except for the matches which I never use.  But it contains many more items as well.  The organizers you buy do not have enough compartments for everything, but you could use a combination of smaller organizers or even box lids and other containers to fit in the drawer or as well.  And there are two other shallow drawers in my desk, so I do not need a “junk drawer.”  The smaller junky items are in small fishing tackle boxes in the drawers.  I recommend people keep the “nuts and bolts” stuff in their toolbox – unless they were frequently used in the office.

The adage, “a place for everything and everything in its place,” still holds true.  It only takes seconds to return the items to their designated spaces, and it could save time and frustration throughout the year.