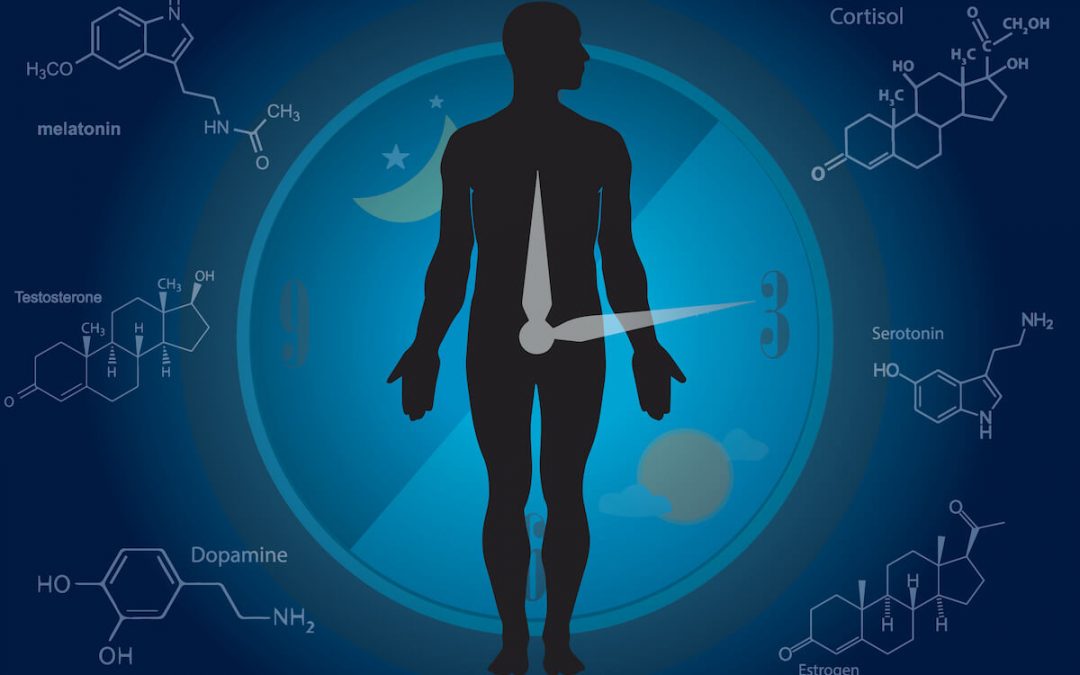 Since ancient times people have experienced getting hungry, sleepy, alert, and so on at specific times of the day, and in the 1960s this whole new field of biology called chronobiology began to study what is now known as our circadian rhythm. It was suspected that part of being “fearfully and wonderfully made,” included being created with a built-in internal clock. It took scientists hundreds of years to find the body’s internal clock but since have since discovered trillions of them in almost every cell of the body, and organs, such as the kidney, liver, pancreas, and intestines, not just our brain. It may be discovered that we have a clock in every cell of our body, all taking cues from the master clock located in the hypothalamus.

The book, The Secret Pulse of Time, by Stefan Klein, relates the case of a French geologist who lived in a dark cave for 61 days. He communicated regularly with the outside world. Although he soon lost all sense of time, and day and night were the same to him, his biological clock kept him going to sleep, rising, and eating on a reasonably consistent schedule.

Our biological clock knows a lot more about our most productive times, energy levels, and low points than the clock on the wall. We would be more productive if we followed our biological clock rather than the man-made one, and ate when we were hungry, and slept when we were tired – instead of pumping ourselves full of coffee and burning the midnight oil. During sleep there is a replenishment of cells needed for a healthy immune system.

Studies were done in schools to adapt hours to match the biological clocks of adolescents. In the U.S., school starting times were changed from 8 a.m. to 8:40 a.m. and in some cases to 9:40 a.m. The studies in U.S. late-start schools reported less student depression, fewer dropouts, less absenteeism, and better scoring grades.

While I was still living in Toronto, a pilot project was started in the fall of 2009 in one of the local high schools. They shifted the entire school day, so classes did not start until 10 a.m. and closed at 4:13 p.m. This acknowledged the latest research at the time, showing that once puberty hits, the brain is wired to go to bed late and sleep in. It also hoped to take advantage of optimal learning time, which is late morning. In the January 18, 2011, issue of the Toronto Star, it was reported that results at that time were all positive, with the Grade 11 math failure rate dropping from 45 percent to 17 percent and attendance improving. Unfortunately, that school has since closed, but other schools have continued to report favorable results. There are so many variables involved in measuring results that there will likely never be universal agreement on its success.

But people’s internal clocks do differ. Generally, teenagers are night owls and do not get sleepy until later. They do not operate on all cylinders early in the day. Senior citizens are the opposite, being early risers.

When time management experts suggest getting up an hour earlier to get a head start on the day, this may not be good advice. Researchers in the field of chronobiology (the study of the body’s natural rhythms and cycles) tell us it could be counterproductive. It depends on whether you are a morning person or a night person, a younger person, or an older person, and what is meant by “earlier.” If it is before 6 a.m., forget it, according to researchers.  In general, that is the time we are least alert. Our ability to think clearly and react quickly is at its lowest point between 3 a.m. and 6 a.m. As mentioned previously, I am awake by 5:30 a.m. but my first activity is walking, which tends to shake away any cobwebs and gives me more energy for what comes next.

I have experimented quite a lot over the years and continue to do so. Before the pandemic hit, my maximum productivity was the hour or so I spent at a coffee shop midway through my walk. At the time of writing, this is still not a viable option. The benefits of increased creativity and performance from the combination of background noises, humming of conversations, and energy from surrounding people were essential according to the research available at the time. I find I can be just as productive in my office during that time by having “golden oldies” music playing softly in the background.