Has time management changed in 40 years? 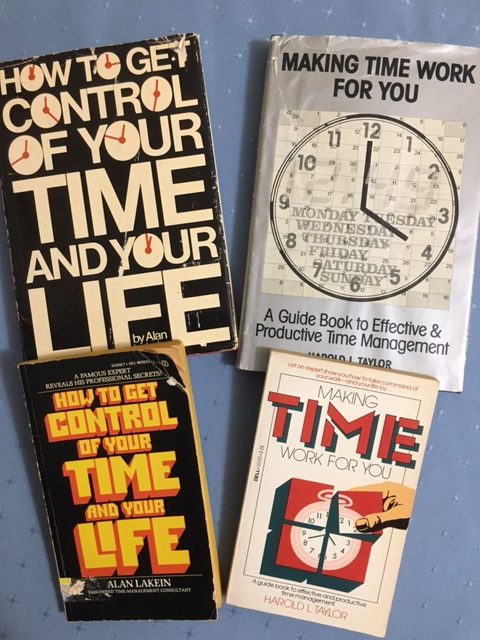 It was 40 years ago when my first book, Making time work for you, was published in 1981. Most of the same suggestions and principles are still valid, at least those that could be adapted to the digital fast-paced world of today. Although Alan Lakein’s book, How to get control of your time and your life, published in 1973 had been touted as the beginning of the time management era, it was not actually the beginning. I still have time management books on my shelf published as early as 1910. But the success of his book, and the subsequent sales of over 3,000,000 copies, certainly popularized the topic.

It was after I read his book that I decided to ask him to come to Canada and conduct a seminar for our Canadian industrial Management Association, forerunners of the current Canadian Institute of Management. I got a first-hand look at a truly time-conscious individual. When I drove to the airport to meet him, I was trying to recall what he looked like so I would recognize him. In those days it was not as common to include author photographs on the book jackets, and the black and white photo he had provided for our publicity was not that clear. But I didn’t have to be concerned. As I stood amid the crowd, trying to spot him coming through the doorway, one gentleman, walking a little faster than the others, was asking loudly, “Alan Lakein, Alan Lakein, anyone for Alan Lakein?” Without missing a step, he was identifying himself while on the move, and after a brief handshake wen he spotted me approaching him, continued walking by my side. “Are we heading in the direction of the parking lot?” he asked. I confirmed that we were, and we chatted politely as we walked.

On the next day it was a full-day seminar, and at the lunch break he asked if I could drive him to the airport and back to get the timing right so he would know what time he had to leave the hotel to catch his return flight following the seminar. He obviously practiced what he preached.

It was after Alan Lakein’s seminar that I decided to specialize in time management and phase out all the other management topics that I had been presenting during those early years. It was impossible to keep current with more than one topic even then. In my seminars, I basically talked about the same things as Alan Lakein, but from a slightly different point of view. I also learned that you should observe what everyone else was doing and do it differently. If you want a glimpse of how I presented my seminars in those earlier days, you can view a four-minute clip on YouTube by clicking here. If you visit YouTube on your own, search “Harold Taylor time management,” but make sure you watch the video that has about 85,000 views. There are others that have been placed there as well by various individuals. I wrote the book, Making time work for you, primarily to let people know I existed, and though it sure didn’t sell 3 million copies, it was a Canadian best-seller and the pocket book edition kept Allen Lakein’s book company on a few of the bookstore shelves – for a very brief time to I might add.

As far as changes to the time management topics since those early days, we now talk about being proactive, setting boundaries, using the neuroplasticity of your brain to gain self discipline, focus, and so on. Plus of course, we must keep up with the latest data and research as well as time-saving technology. But the basic principles have not changed since Alan Lakein’s time.

Statistics do change as more accurate studies take place. For example, 21 days to form a habit (obtained from a misunderstanding of Maxwell Maltz’s work) was replaced with an average of 66 days, and later clarified further by the fact that it is the frequency, not the number of days that determine when a habit is firmly established. Other research had been misinterpreted or oversimplified as well, such as the 10,000 hours of practice required to become proficient at any skill. It depends on how you practice.

In addition, time management is now becoming holistic in its approach as we discover that sleep, energy, attitude, and so on, have a much larger influence on efficiency and effectiveness as we had originally thought. The information explosion is still exploding, and we must keep abreast of the changes. That is one reason why most recent books emphasize the need to focus more on fewer things, as witnessed by books such as Essentialism, The power of one thing, The one thing, and Master of one.

Next week, I will tell you which time management books I have found to be the most helpful. They’re not always the latest ones. Ideas do not have “best before” dates.