Interruptions can be avoided or controlled. 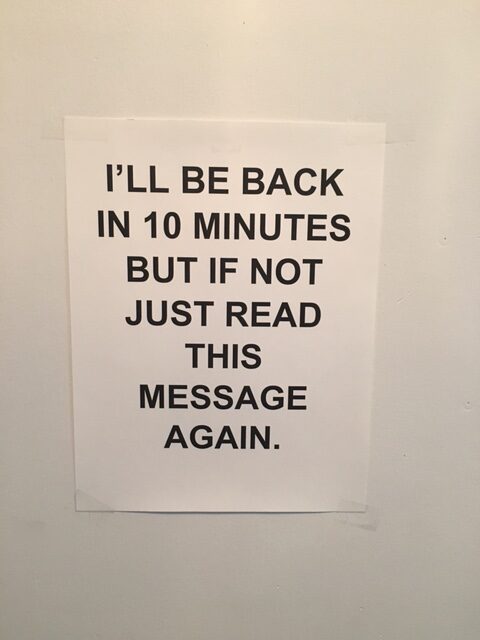 John Medina, in his book, “Brain rules,” remarked that studies show that a person who is interrupted takes 50% longer to accomplish a task. Not only that, he or she makes up to 50% more errors. And according to Rescue Time, knowledge workers check email fifty times a day and use instant messaging seventy-seven times a day. That’s a lot of self-interruptions.

According to Basex, interruptions, plus the time it takes recovering from them, consume 28% of a worker’s day. Gloria Mark, a researcher at the University of California, found that employees only spend eleven minutes on any given project before being interrupted, and that it takes twenty-five minutes before they get back to the original task. It is also estimated that about 50% of the interruptions were self-induced. For example, stopping to check e-mail, or answering a text message.

What can we do about it? Normally, a sudden distraction or interruption while you are working grabs the attention of your core brain, and without highly developed focus, you cannot prevent that from happening. You have control of your executive function, the thinking part of your brain, but not your core brain. It is simply too fast for you. In fact, it has been shown that you jump before you are even aware that it was a snake that suddenly slid out from that bush, let alone whether it was dangerous. That’s your core brain’s programming to protect you from danger.

Unfortunately, it is the same reaction when that ding from your smartphone indicates a new text message and you are instantly distracted without even knowing whether it was even worth reading, let alone answering.

The good news, however, is that immediately upon being distracted, your executive function in the prefrontal cortex of your brain can take over, and you can decide not to respond to the interruption, but to continue working on the task that you have been working on.

It takes self-control or willpower to resist being sidetracked and to immediately resume your scheduled task. Focus is what you need once you are working, not once you have been interrupted. And if the strength of your focus were at its peak, you probably would not have even noticed the beeping smart phone or seen the message appear on your smartphone. Remember the gorilla experiment and intentional blindness? It revealed that people who are truly focused on one thing are likely to overlook something else. To demonstrate this, they created a one-minute edited video where students form two teams and pass a basketball among themselves. Viewers were asked to count the number of times the players with the white shirts pass the ball and ignore the number of times those wearing black shirts pass the ball.  They had to pay attention because the basketball was passed thirty-four or thirty-five times. But the researchers were not interested in task-counting ability. Halfway through the video, a female student wearing a full body gorilla suit walked into the scene, stopped in the middle of the players, faced the camera, thumped her chest, and then walked off, spending about nine seconds on screen. After asking the viewers about the passes, they asked the more important questions, such as “Did you notice anything unusual while you were doing the counting task? Did you notice anything other than the players? Did you notice a gorilla?”

You would think that someone wearing a gorilla suit would be a major distraction. But amazingly roughly half the subjects in the study did not notice the gorilla. The experiment was repeated many times under different conditions with different audiences and in multiple countries with the same results. Why didn’t the viewers notice the gorilla? Because they were concentrating so hard on counting the passes that they did not even notice it.

You will notice that intentional blindness is a bad thing if you focus on a smartphone when you should be focusing on your driving. But it is a good thing when you are focused on a specific task and ignoring potential distractions. You are mentally equipped to focus on either the task at hand or the distraction. It is a matter of choice.

This is what I call the power of focus. If someone can ignore a gorilla, they can certainly ignore background noise, people walking by their desk, a below normal room temperature, an instant message arriving on their iPhone, or a dozen other distractions that might occur daily. But they must be so focused on what they are doing, so intent on sticking to the task at hand, that they could ignore the distractions and maintain sustained attention to the task that they are working on.

Focus is a matter of managing yourself, or more specifically your brain. My eBook, Focus: how to ignore distractions and get more done, published by Bookboom.com explains at length how to do that. But a quick answer is to see focus as the opposite to multitasking and concentrate on only one thing. You can train your mind to focus simply by using willpower. Then let intentional blindness do the heavy lifting.

You have two ways of coping with interruptions. With a highly developed power of focus, you ignore distractions. But even if you are distracted, you can choose not to follow the distraction down a rabbit hole, but to quickly gain control of the distraction.

At the start of each work session, which I recommend should be no longer than 90 minutes before taking a break, close your office door if you have one, put your smartphone on airplane mode, engage the voicemail on the landline, ignore your email, and thereby postpone most of those potential interruptions. You will now be able to control the length of the interruptions, which represent the bulk of the time loss.

How does gaining control of the interruptions save so much time? You now have the choice, during the break times, whether to ignore the interruption altogether. (It may be a salesperson making a cold call or your daughter telling you she is staying for basketball practice after school and will be late getting home.) Some calls you may delay to a better time, or even the following day. Others you may decide to respond to at the next break by phone, email, or text message. But in all cases, you are now in control of the communication medium, whether speaking or writing or texting and you can get quickly to the point and control when the communication ends. (It’s akin to going to someone else’s office rather than meeting in your own office. It’s easier to leave than to get rid of someone.) And if you have staff members, you may assign some call-backs to others as well.

Never underestimate how quickly you can deal with interruptions once they are within your control, and you are no longer at the mercy of others.