Know how to say no. 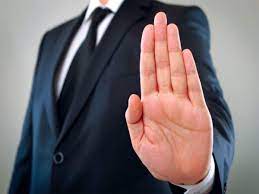 To police your boundaries, you must be able to say no when appropriate. We hate to disappoint someone, especially friends and people we like and respect. And we do not want to appear uncooperative or selfish. We do not want to let them down. But separate the request from your relationship with the person asking you to do something. Denying the request is not the same as denying the person.

Do not get into a long discussion about why you should or should not say yes, and how you could make it work, and how you might juggle the extra tasks, or whatever. You are the only one who fully understands how saying yes will impact your job and your future. Saying yes to anything usually means saying no to something you are already doing. It could mean spending less time with your family, or delaying an important project, or putting yourself under stress, which would negatively impact all your work.

Dr. Randy Alcorn is an author of over 50 books and a popular conference speaker. His assistant has been asked to respond to requests to speak by saying, “Randy has to say no to the great majority of good opportunities so that he can say yes to the very few that God wants him to do.” Dr. Alcorn is a Christian writer, not a speaker, and he feels the time to prepare, travel, speak and recover would take too much time from his writing.

If we have a mission statement, goals, and personal policies, we will know when to say yes and when to say no. If we feel that what is being asked is not a fit, we must say no. Never agree to something simply because there is no one else to do it. You must be sincere in your reply. Do not leave someone hanging in midair, not knowing whether to approach someone else or not. Simply let your yes be yes and your no be no.

You may have to check your planning calendar and review your long-term commitments to see whether you can eliminate something from your schedule but give a time or date that you will give your response. You cannot do everything, even though you might want to do it. I had to resign from the board of directors of the Chamber of Commerce to organize and oversee a seniors’ ministry at the church. You must follow your heart and do what you feel led to do. But if your heart is not in it, you are best not to take it on.

Greg McKeown, in his excellent book, Essentialism: The Disciplined Pursuit of Less, tells the story of a young 12-year-old girl whose father was presenting at an event in San Francisco. He had promised to take her on a night to remember after the session. Attending the last hour of his presentation, and excited about the prospects of a trolley car ride, Chinese food, souvenir shopping and other things promised, she was leaving the convention centre with her father when he met an old college friend and business associate. They were both immediately invited to join the friend and his wife for a seafood dinner at the Wharf. Evidently, her father was doing work for the man’s company as well, and her hopes were crashed as she envisioned a boring evening listening to adults talk to one another. She did not even like seafood!

As it happened, her father replied, “Dinner at the Wharf sounds great! But not tonight. Cynthia and I have a special date planned, don’t we? At that point he winked at his daughter and grabbed her hand. She told the story to McKeown only weeks after her father had died and said, “It bonded me forever because I knew what mattered most to him was me! Cynthia’s father was Stephen Covey, author of the book, Seven Habits of Highly Effective People, and other books, the man who had told leaders and heads of state around the world that “the main thing is to keep the main thing the main thing.”

McKeown, in the same book, also told of the management and productivity expert, Peter Drucker’s way of saying no when an associate requested an interview for a book he was writing. In part, Drucker’s reply was “Productivity in my experience consists of not doing anything that helps the work of other people, but to spend all one’s time on the work the good Lord has fitted one to do well.”

A little humor also makes a negative response easier to accept. In the 1970s, after Lawrence J Peter’s 1969 book, The Peter Principle became a bestseller, I asked him to address our association, the Canadian Industrial Management Association. (The forerunner of the Canadian Institute of Management.) Basically, the Peter Principle states that managers who are competent at their current positions will earn successive promotions until they reach a position that requires different skills. At that time point, promotions cease. This leads to Peter’s Corollary: “In time, every post tends to be occupied by an employee who is incompetent to carry out its duties.”

Here is how Laurence Peter replied to my letter requesting he speech at one of our meetings. After a paragraph expressing gratitude for the invitation, he replied, “Unfortunately, if I were to accept such an invitation, I would become a victim of my own principle.” He was declining graciously and with humor. And humor usually diffuses, or at least softens, the disappointment.

People-pleasers are looking for affirmation from others, and they fear rejection and disapproval. Have the courage to say no.