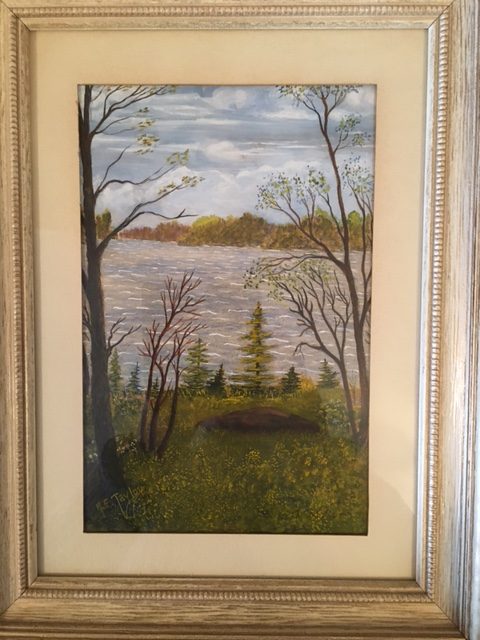 I believe the opposite is also true.  If you respect the maker, you respect the object.  I always had respect for my father and so I valued the items he made – everything from that handcrafted coffee table with the snow scene painted on top to the house he built in Timmins, Ontario where he and my mother raised five boys.

That was some 80 years ago and the table, perhaps a little amateurish to the average person, no doubt has ended up in a junkyard or burned for firewood. The house has long since been torn down to make room for more elaborate buildings.

The only tangible memories of my father other than a few photographs are one of his paintings that hangs on my office wall, and an old gnarled wooden cane in the corner of my closet.  When I am gone, no doubt they will cease to exist as well.  They have no monetary value, a quality that many people naturally treasure more than other people’s memories.

When well-meaning children and grandchildren take on the task of downsizing their parents’ or grandparents’ stuff, I hope they first take the time to ask the history of some of those items.

These days people seem to be more concerned about all the stuff that is stored and less about where the memories that stuff elicits are stored.  Dementia is at an all time high, so you can no longer rely entirely on your brain.  It needs a little help from your stuff because much of it is connected to memories stored in the brain.

Stuff consumes space, but so does any container.  And if the stuff is controlled and accessible, it can be an efficient way to connect to memories. Memories are even more efficiently recalled when connected to music from the past.

They are not all useless items. And not all the connected memories are happy ones. When I see that cane for example, I see my frail father in the doorway of the small apartment where he and my mother spent their last days together before the nursing home stage of their lives, and their eventual deaths.  He is leaning against the door jamb and maintaining his balance with the cane while he waves goodbye to me as I step into the elevator.  I imagine there were tears in his eyes because he loved me to visit and hated to see me leave.

I stick my head out of the elevator and give a final wave before the door closes.  I don’t know how long he stands there after I disappear.

Although there were no tears in my eyes as I left, I felt so sad for him. But there are tears in my eyes now as I visualize those days.  But when I look at the cheerful painting of his hanging on my office wall, I see happier times. I am ten years old and he is leaning over my shoulder as I try to imitate him by painting a picture on the back of a piece of Masonite.  He grabs my brush, dabs it into the red oils, and smears the paint across the canvas.

I don’t have anything that belonged to my mother. But every time I pick up a copy of Reader’s Digest, I am reminded of her. She always encouraged me to study the “Word Power” section because she knew I liked to write. Who knows, someday her youngest boy might get published.

There is a lifetime of memories in some of those so-called useless items people hang onto – sometimes many lifetimes of memories if the items survive several generations without being trashed.

But I think I’ll toss that cane.