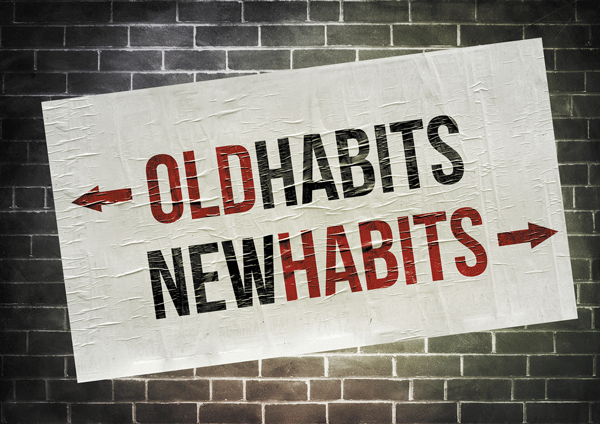 Building routines and forming habits are easy, because our brains love to conserve energy. Forming the right habits – those that are more conducive to health, productivity and general well-being – is more difficult. We are forming habits all the time, unconsciously, when we mindlessly repeat the same behaviours. Studies suggest that as much as 45% of our daily actions are performed automatically. As Dimitriadis and Psychogios suggest in their book Neuroscience for Leaders,  “If we had to consciously consider and analyse every action we took every single minute of the day, then we would be paralyzed by information overload and we wouldn’t be able to achieve much.”
Job Dispenza, in his book You are the Placebo, goes so far as to maintain that by age thirty-five, 95% of who you are is a set of memorized behaviours, skills, emotional reactions, beliefs, perceptions and attitudes that function like a subconscious automatic computer program.
Although most habits are formed easily, without thinking, many of them are not good habits from a health or productivity standpoint, and changing them is not easy. One study found that only one in nine people who underwent heart surgery were able to change their lifestyle, and even these people were motivated by the threat of possible death. According to John Ratey, author of the book Spark, statistics show that about half of those who start up a new exercise routine dropout within six months to a year. And I’m sure you know how difficult it is to keep New Year’s resolutions.
The habits that we have unconsciously developed during our lifetime are not all good ones. Unconsciously your brain will lean towards behaviour that is rewarded at the time, whether that involves comfort food or escaping danger. Jumping to your left as you notice a shadow on your right is not a bad reaction, especially if it turns out to be a poisonous snake or something falling from a rooftop. On the other hand, eating junk food every noon hour or downing a couple of beers after work every night may not be a good idea from a health perspective – even though they may relieve stress at the time. Neither habit consumes much energy. But it makes more sense to use that energy to form healthier habits.
That’s where self-control comes in handy. It requires self-control to break habits and consciously form new ones. The old belief that it only takes 21 days to form a habit has been debunked long ago. It has since been found that it takes an average of 66 days with a range of 18 to 254 days, depending on the habit, the circumstances and the strength of your current self-control.
The good news is that once a good habit has replaced a bad one or you form a completely new habit, it takes little self-control to maintain it. Of course the usual way of forming a new habit is to act out the new behaviour again and again until it becomes the new habit. It’s similar to the way most people memorize a poem or song lyrics or scripture – repeating it again and again until you can recite it at will. The difference is that with memory, you have to review it every so often in order to retain it in long-term memory. If there is no need to recall it frequently, it fades from your memory. With business-related or personal habits, you never really stop performing the activities on a regular basis, and you are strengthening the habit with every repetition.
To break a bad habit is difficult; because you are fighting your unconscious brain every step of the way. It resists change. But if you can replace the habit with one that produces a similar reward, it becomes easier.
There are ways to make the process easier,  without consuming as much brain energy or requiring as much self-control. These ways include such things as making the change gradual, modifying the environment, using the buddy system, and piggybacking on a habit that is already firmly in place. These will be covered in the next article.