Your brain’s role in managing time. 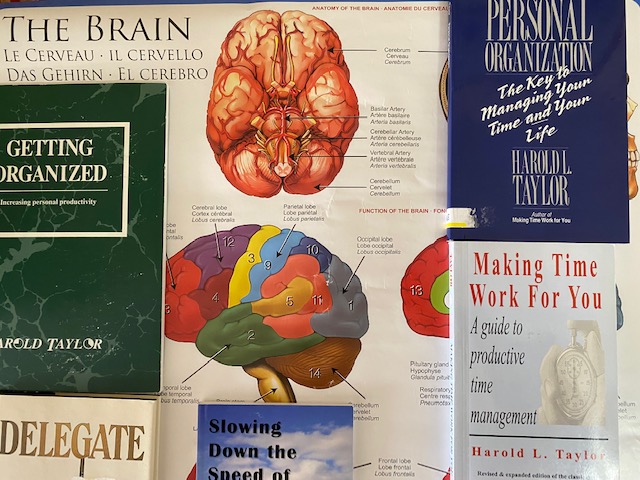 Sometimes referred to as” habits of the mind”, a person’s “executive skills” are those brain-based skills required to execute tasks – that is, getting organized, planning, initiating work, staying on task, controlling impulses, regulating emotions, and being adaptable and resilient. These skills reside primarily in the prefrontal cortex, that part of the brain that helps you manage complex problems, set goals, and maintain self-control. We are all born with executive skills; but they take about twenty years to develop, and not all to the same degree.

People with weak executive skills are those who have trouble getting organized, managing time, planning, and staying focused. They tend to be impulsive, procrastinate, and get easily sidetracked.

If a children had these characteristics, they would probably be diagnosed as having ADHD. Many researchers believe that ADD and ADHD are disorders of executive skills. All agree that if the child has ADHD at least some executive skills will be impaired, such as the ability to pay attention and stay focused, manage their time, and stick to one task for any length of time.

The female brain is smaller than the male, but the prefrontal cortex matures about two years earlier, giving girls an advantage when it comes to executive skills such as sustained attention, self-regulation, and emotional control. This could be the reason why nine boys are referred to medical clinics for behavioral problems for every girl, and why boys are three times more likely to be diagnosed with ADHD.

You are never too old to strengthen specific executive skills, thanks to the plasticity of our brains. For instance, you may find that professional organizers or time management trainers choose that profession because of highly developed skills in that area. But others, including myself, struggled in that area, but due to their persistence, developed a strength out of their weakness. That is why you should never say you will never be able to get organized or tell yourself and others that you are always late, or that you can’t help procrastinating. What you tell yourself and others, and what you repeatedly do, is basically what you get. That’s how neuroplasticity works.

Strong executive skills are critical in today’s digital age of speed because life is getting more and more complicated, with increasing numbers of choices and decisions to make, and less time in which to make them. For this reason, I believe that time management strategies must focus less on the environment, which is frequently difficult to control, and more on mental control. We cannot control how the world is changing, the advance of technology, the pace of life or the information explosion. But we can change how we react to these things. And although some of that may still be physical, success in the future will depend more on what’s going on in your mind, body, and spirit than what’s going on in your office. That’s why we are more frequently calling what we teach “holistic time management.”

All twelve or so executive skills that have been identified to date are important, but one of the more important ones in this fast-paced, digital environment where interruptions are legion is the one referred to as sustained attention.

Sustained attention is the capacity to focus on a task despite fatigue or boredom – to be able to maintain attention and not be easily distracted or sidetracked. You are strong in this executive skill if you can screen out distractions and complete a task without your mind drifting to other thoughts. But if you’re easily distracted, have trouble completing tasks, frequently interrupt yourself to deal with e-mail, text messages and so on, then you have weak sustained attention skills.

There was an experiment conducted over 15 years ago that involved subjects watching a video of two basketball teams quickly passing a ball back and forth among players. They were specifically asked to count the number of passes one of the teams made. The psychologists showed the same video to everyone. A student dressed in a gorilla suit walked to the centre of the court about halfway through the brief video. Half the viewers never noticed. They coined the phrase “intentional blindness” to describe the fact that some people can become so focused on a task that they are unaware of even the most obvious distraction. Their sustained attention skill is highly developed. The actual experiment is described in the book, The Invisible Gorilla, by Christopher Chabris and Daniel Simons.

If you would like a brief description of the other executive skills and their impact on time management, refer to my e-Book, Strengthen Your Executive Skills, published by Bookboon.com.