A little empathy can go a long way. 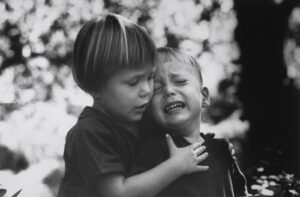 Feeling empathy for another person is being able to know what the other person is feeling or going through even though you are not sharing the source of those feelings or emotions at that time. For example, when someone suffers a loss or injures their hand, you can understand their feelings and even feel their pain without actually suffering that loss or being injured. You empathize with them.This is possible because of mirror neurons, cells scattered across our brain whose activity reflect their surroundings – including the actions and feelings of others.
Our mirror neurons fire regardless of whether we or someone else is performing a specific action. That enables us to relate to the person to the degree that we even have a fair idea of why they are performing that action. For example, when you are grabbing a cup of coffee, a specific mirror neuron fires to tell your hand to reach out and grip the handle of the cup. And when you watch a friend pick up her own cup of coffee, the same neuron also fires as if you were also picking up her cup of coffee, even if your hand is not moving at all.
This empathy with others includes emotions. So if you cringe at the sight of someone else getting hurt, empathize with your friend who is grieving, and feel uncomfortable when a co-worker is upset and anxious, blame it on these specialized brain cells.
When mother said, “This hurts me as much as it hurts you,” she wasn’t fibbing. Studies show that the pain we feel when others get hurt activates the same regions of the brain that are activated when we actually get hurt ourselves.
And there is a thin line between being physically hurt and emotionally hurt. In her book, How the body knows its mind, Sian Beilock reports that a daily dose of Tylenol diminishes the hurt feelings that often accompany being socially teased, spurned or rejected – just as it would if the pain were physical.
Never underestimate the importance of empathy. According to an article in the November/December, 2009 issue of Scientific American Mind, research has shown that patients whose doctors pay attention to their feelings and concerns heal faster. Researchers also found that the patients’ immune systems were boosted as well. The article reported on a study by the University of Wisconsin, School of Medicine on the impact of doctors showing sincere concern for their patients.
Patients of doctors who expressed concern had a cold disappear sooner than those whose doctors focused on just the facts. Randomized trials showed that colds lasted an average of just six days for patients with empathetic doctors vs. seven days for patients whose doctors had little empathy. It was shown that the empathy also boosted the patient’s immune system.
But can doctors or any of us actually show empathy on demand? Do we have control over whether we have empathy or not? Well we can certainly give our mirror neurons a fighting chance to do their thing. Just because we are in a rush, for example, doesn’t mean we have to act as if we’re in a rush. University of Kansas researchers studied the effect of doctors standing vs. sitting when visiting their hospital patients. When questioned afterwards, the patients whose doctors sat with them perceived the visit to be a lot longer than those patients whose doctors stood by their bedside.
Whether you are a doctor, a caregiver, a manager or a parent or whoever, even if you have only 10 minutes to talk to a person, you can still sit down—which makes you much more connected to the person than if you’re standing up—and make good eye contact, nod your head, lean in – all the actions that convey that you are present mentally and emotionally as well as physically.
The worst thing you can do is remain standing, walk to the door, put your hand on the door handle, and keep talking, because then the person does know that your mind as well as your body is already on the way out. Instead, you could stay seated and say, “If you have another question, I can answer it now, and if you’d like more time to go over things, we can schedule another visit.” That way, you’re completely with the individual, and not sending the message that you can’t wait to get out of there.
Although environmental factors such as surroundings can have a calming effect on people, they aren’t as important as the human element.
A bad mood is also contagious, according to Gary Lewandowski, Jr., associate professor of psychology at Monmouth University. You unknowingly pick up other people’s nonverbal behaviors and tend to mimic them – similar to yawning. (It is more common when the person yawning is someone close to you.)
Similarly you can pick up their high energy or low energy, positivity or negativity, enthusiasm or lethargy.
And as if having to cope with the hazards of second-hand smoke isn’t bad enough, it’s now found that second-hand stress can be hazardous to our productivity and health as well. The suggestion that stress can be contagious, and that we are influenced by the actions and emotions of others can be accounted for by the research that suggests this class of brain cells called mirror neurons appear to reflect the actions & feelings of others.
Not only does this make sense of the fact that we sometimes get “bad vibes” from people we meet, it also proves that we can have a positive influence on others – whether family, friends or business associates – by being kind, caring, compassionate and cheerful.
And by encouraging those mirror neurons to do their thing.