A time to be messy 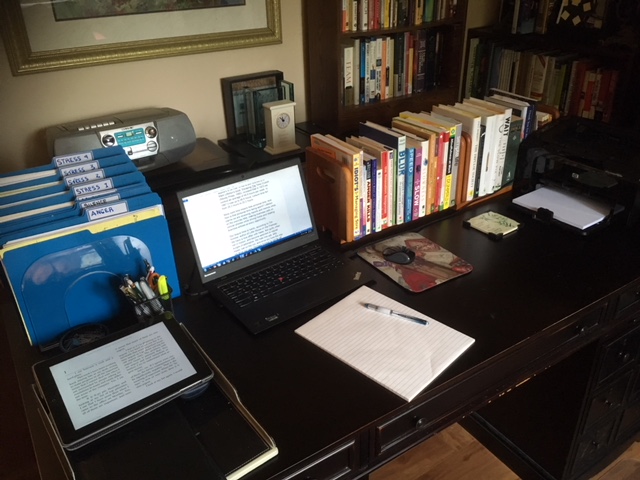 Many years ago a TV personality from Montréal, Canada, interviewed me during a National Association of Professional Organizers conference in the U.S. It was for a TV special he was doing on messiness. Naturally, considering what I do and what I preach, I explained the various benefits of getting organized and working in a tidy office – emphasizing its impact on efficiency and personal productivity.
It turned out he was a messy himself, and proud of it. I soon discovered that he was a creative genius in his field. He spent an equal amount of time telling me the merits of messiness and how it relaxed him, inspired him, gave him pleasure, and of course creativity.
I gave it my best shot, including the average time wasted searching for things, the interruptions, and the lack of focus and so on – to little avail it seemed at the time. He kept returning to the joy he received from his messy environment.
Probably through frustration, I ended up telling him something to the effect that if he found a messy office was pleasurable, relaxing, and inspired his creativity, then he should keep it that way. But once he had dreamed up a new project and was ready to get down to business, he should move to a second office – one that was organized and more work-friendly. There he could complete the project efficiently, effectively and on time.
It was a tongue in cheek suggestion, and I must admit I was a little embarrassed and resentful at the time that I was unable to present my fellow organizers in a more favourable light.
Fast-forward about 20 years, and I recently read several articles on the merits of a messy desk and its relationship to creativity. One of the articles was titled “It’s okay to have a messy desk,” and subtitled “It’s also fine to have a clean one. There are advantages of both,” written by Diane Peters.
In that particular article, a professional organizer who I know and respect, Claire Kumar, was quoted as saying that it’s necessary to have a lot of stuff around when our job requires it. She called it “process mess.”
Now the lightbulb turned on. Claire had hit the nail on the head – “process mess.” I feel I have an organized office – when I’m not working. But once I start the writing process, which consumes about half my time, I have reference books, notes, photos – you name it – strewn about my desk. I try to keep it all visible, and in different areas of my desk; but if you walked in on me, it would appear as clutter.
My eyes dart from one piece of paper or book to another as I write, make notes, and dictate to my computer in any order. I sometimes start to write a blog article, and it ends up being a book. I just keep writing a series of blog articles on that topic and later piece them together to create the book. At the same time, get my supply of tweets from ideas generated by other people’s books or articles as well as ideas for new seminars to deliver locally. I continually make side notes of ideas that come to me during this “writing” process.
I prefer to call it “organized mess”; but it does stimulate creativity. It’s akin to brainstorming, where one idea generates yet another.
Once I have completed the “creative writing” part of the project, however, my desk is once more neat and tidy, and the “administrative” portion begins. The books I write for Bookboon.com require a bibliography, both a long and short description of the book, a “multiple choice” quiz, formatting according to their specs, and so on.
In the same way, when I self-publish a book, I have to go through the various steps to make it print-ready, including the cover, size, paper stock, layout and so on.
A significant percentage of everyone’s time is administrative, not creative. For some people it may approach 100% administrative, depending on their job. In that case their desk and work area should be organized to facilitate efficiency, not creativity.
If you have a job requiring creativity, you don’t need a separate office – as I once blurted out to the interviewer. You just need an organized one, with a guilt-free allowance for what Claire Kumar refers to as “process mess” as the need arises.
I’ve never yet met anyone who has a job that is 100% creative. If there is such a person, I know where he or she can find an office to replicate. It’s somewhere in Montreal.
I snapped the accompanying photo of my desk just before starting to write a book on stress. I snapped another photo at the end of my writing session, which I will include with next week’s blog article. At that time I will provide more detail on my tidy-neat-tidy writing cycles – and how ideas are frequently generated during the process.