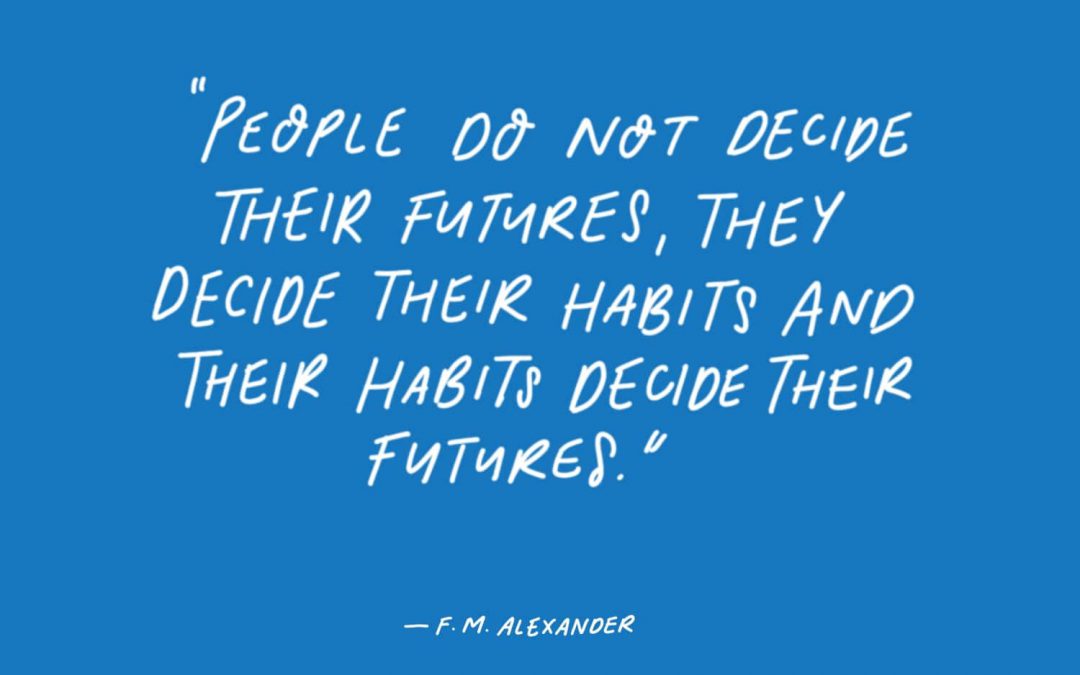 You are your habits

How much of your life is habit? Charles Duhigg, in his book The Power of Habit, quotes a Duke University researcher who in 2006 found that more than 40% of the actions of people performed each day were not actually decisions, but habits.
More recently, Joe Dispenza, in his book, You are the placebo, maintains that by age thirty-five, 95% of who you are is a set of memorized behaviors, skills, emotional reactions, beliefs, perceptions, and attitudes that function like a subconscious automatic computer program.
Change isn’t easy. One study found that only one in nine people who underwent heart surgery were able to change their lifestyle, and even these people were motivated by the threat of possible death. According to John Ratey, author of the book Spark, statistics show that about half of those who start up a new exercise routine dropout within six months to a year.
To change your behavior, you have to start by changing your thoughts, according to Joe Dispenza. It’s your thoughts that determine your choices, which in turn determine your behaviors, and ultimately how you experience life.
It takes effort to change since you have only 5% of the conscious “you” to chip away at. The 95% that is already set in its ways. But you are the master of your brain, and when you repeat a thought or an experience often enough, your brain cells are making stronger connections in the direction you want to go.
You are consciously forming the habits that you really want, and creating a new life in the process. It’s difficult to break firmly entrenched habits or behaviors. To make it easier, you may want to consider the following suggestions:
Make changes gradually.
According to MJ Ryan, author of This year I will …, when we try to make changes that are too aggressive our system tries to maintain the status quo by swinging in the opposite direction. This is the reason that strict diets don’t work. It is the same with the application of time management ideas. Too many changes introduced at once decreases the chance that you will stick to the changes long enough for them to become a habit. So make one change at a time.
Do it together.
Weight Watchers have found that people who use a support group are three times more likely to lose weight than folks on their own. When attempting to break a habit, it helps to have someone to be accountable to. This “buddy system” can be applied to both job and lifestyle changes.
Replace a bad habit with a good one.
It’s a lot easier to build a new habit than to break an old one. So don’t focus on breaking the old one. Instead, form a new habit to replace it. You will form the behaviors that you reinforce, and the old ones will fade away from disuse.
Piggyback a new habit on a good habit that is already established.
To more easily form a habit, anchor it to an old one that is firmly entrenched. For example, if you are already in the habit of walking first thing every morning, and you want to spend 20 minutes every day learning a new language, you might take your books with you in a backpack when you walk and spend twenty minutes studying in a coffee shop on the way home.
Without doubt it takes determination and effort. But remember, while you are forming the habits, you are also creating a new life in the process.