Creativity and organization are not incompatible. 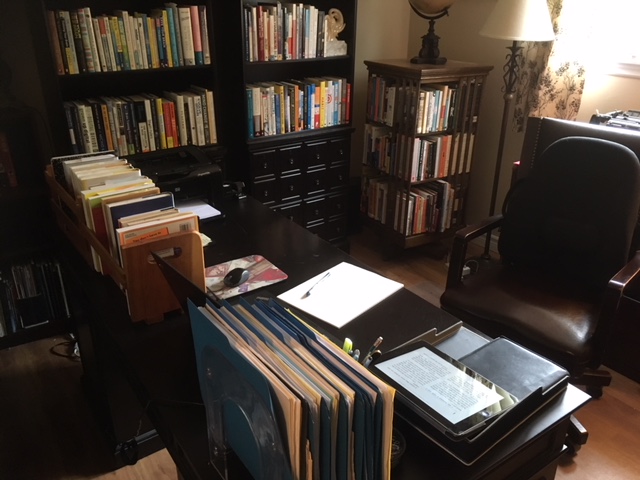 In case you haven’t read my last couple of blog posts, I have been discussing how some books, articles and other literature have been claiming that messiness aids creativity, while others claim the opposite.
Mehmet Oz and Mike Roizen, authors of YOU: On a Diet, claim that visual clutter slows down the brain. That’s why clusters of road signs double the chances of missing the one you’re looking for. It also explains why website designers aim for simplicity.
As we read more about the workings of our brain, we also learn even more about the importance of getting organized. For example, according to neuroscientist Torkel Klingberg, author of The overflowing brain, the more items on your desk, the greater the demand on your attention. And mental clutter is a suspect in the cause of age-related memory losses. Clearing clutter from your desk, office and home and leaving more wide open spaces also helps to clear your mind so it will be more productive.
There is a seemingly opposing view that mess is great for generating ideas, and many people (including a successful TV personality and producer) feel they are successful because of their messy environment.
I take the middle ground, and mentioned in my previous articles how professional organizer Clare Kumar had referred to “process mess,” an acceptable temporary mess, generated by the nature of the work itself. The accompanying photo shows a view of my office before I started work in the morning. (The photo last week showed it during the writing process.) I admitted that I do get ideas during the messier writing process; but when it comes to the large part of my time involving administrative work, an organized environment wins hands down.
I am a confirmed neatnik. (I have an almost irresistible urge to straighten pictures on the walls of someone else’s home when I am an invited guest.) Before I start writing, my materials are organized on and around my desk. Articles on the topic previously ripped from magazines, notes I have written to myself on the topic in the past, seminar notes on the topic, etc. are stored vertically in manila folders to my left. Books on the topic are within reach in an accordion bookcase on to the back of my desk (having been removed from my library of books in advance.) Electronic Kindle books on the topic are readily accessible on both my laptop and iPad, and articles, tweets and other items that I have written in the past are filed in electronic folders on my desktop. Everything is neat and tidy and ready to go – as depicted in both this week’s photo and the one posted two weeks ago.
But once the writing process is underway, the neatness transforms into “organized mess” or “process mess,” which sometimes may slip into the “disorganized mess” category; but not often, since I usually write for only 90 minutes at a time. I described this stage of my writing process last week.
If you want to have a working environment that is always supportive of creativity, try merging it more with nature. Richard Louv, in his book, The nature principle, claims that reconnecting to nature opens new doors to creativity, and that “creative people are often aware of being drawn to the outdoors for refreshment and ideas.” He mentioned that creative people like Albert Einstein and philosopher Kurt Godel used to take walks in the woods every single day at Princeton campus.
Louv also quotes Hilary Mantel, 2009 winner of the Booker Prize, as saying “I always work outside, if I can. It’s important to grab the instant thought.”
Florence Williams, in her 2017 book, The nature fix, adds more examples of creative people who believed in walking outdoors while thinking, such as Aristotle, Darwin, Tesla, Teddy Roosevelt and Beethoven. Williams laments that we’re losing our connection to nature
In choosing your office and decor, you should not overlook indoor plants and greenery, window views of nature, and even paintings of flowers and landscapes. The more we gravitate toward the cities and hole up in our offices, the more we withdraw from nature and its largely unrecognized or unappreciated benefits.
Studies have shown that the presence of potted plants, for example, improves not only creativity, but productivity, performance and learning ability as well. In the case of schools, the presence of plants improved scores in mathematics spelling and science between 10% and 14%.
So it would appear that walking, thinking and working outdoors would be the first choice for generating ideas, and if you can’t do your creating outdoors, bring as much as possible of nature into your work area – even if it is just painting the walls green, the color most associated with creativity.
In my eBook, How work environment impacts productivity, published by Bookboon.com, I relate some personal experiences with working environments. One of my most productive routines is to take a 15 or 20 minute nature walk, ending up at a coffee shop where I write the article dreamed up along the way.