Do not confuse procrastination with delay 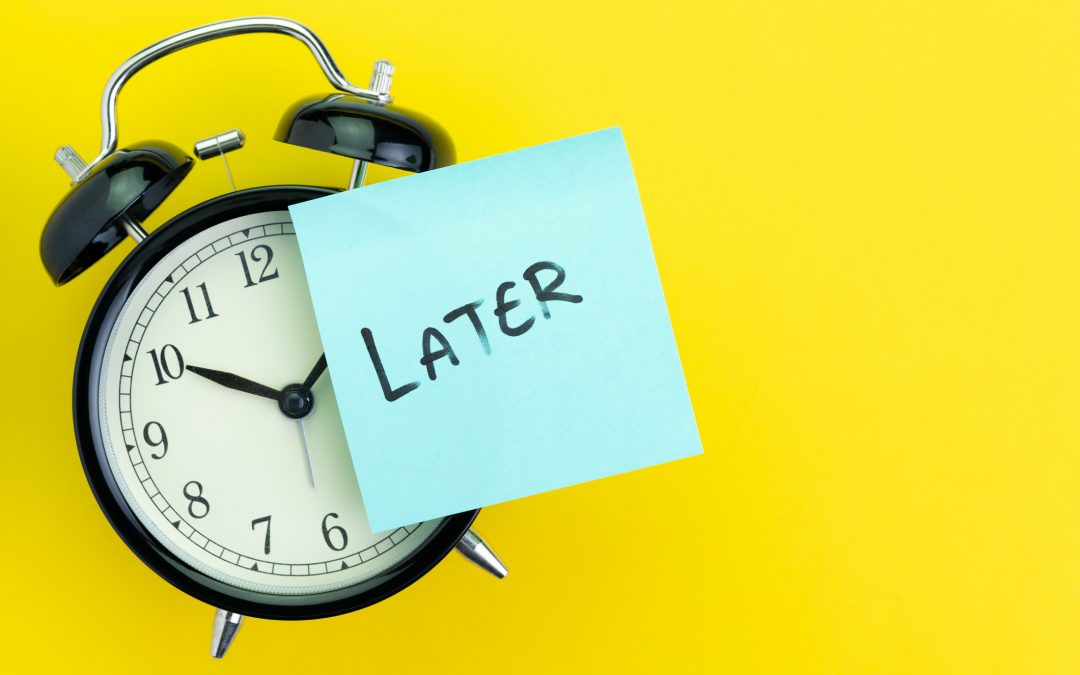 Procrastination is the continual, deliberate postponement of tasks that are best done now. It is putting off what you want most in favor of what you want at the moment.

Deciding to complete a task at a future date is not procrastinating; it is planning.  And delaying a priority task the odd time is only being human. But putting off tasks becomes procrastination when the postponement becomes habitual. When you procrastinate, you are borrowing time from the future that must be repaid later, perhaps when you can least afford it. It is doing the right thing at the wrong time.

Procrastinating on priorities is bad, delaying non-priorities is good, and knowing the difference is essential. Remember that important items have intrinsic value; but urgent items simply have a time restraint. Act based on importance, not urgency. The general guideline is if something is both important and urgent, do it now. If it is important but not urgent, schedule time to do it later. If it is not important, ignore it whether it is urgent or not. One thing worse than doing nothing is doing nothing while thinking you are doing something.

If you leave a priority until later, you may end up postponing it indefinitely. If it is important enough to do, make an appointment with yourself in your planner to do it at a specific time in the future. Whatever you do today will impact tomorrow, and whatever you put off until tomorrow will impact today. So never put what you should do ahead of what you must do.

There is a time for action and a time for delay. If you delayed responding immediately to a derogatory or sarcastic email rather than snap back with an equally unflattering response, you would not call that procrastination. You would call it intentional delay.

There is a time for quick action and a time for delay, depending on the situation. Not launching a new product until doing adequate market research is not procrastination. Neither is editing a manuscript before submitting it to a publisher or rehearsing a sales presentation before visiting a prospect. Delay is sometimes essential to success.

Even items that are both important and urgent should be delayed if you have a little wriggle room. Keep in mind that there are three layers or sections to our brain,  and when under stress or perceived to be threatened, the amygdala in our core brain is activated since its job is to protect us from harm. If there is not enough information to make a perfectly safe decision, or it is risky, it always assumes the worst. A knee-jerk decision is not always the best one. A delay or long pause will give the “thinking” part of your brain, the prefrontal cortex, time to decide. It can override both the core or primitive part of the brain as well as the emotional part.

More problems are caused by making decisions too quickly than by waiting too long. This is especially true in this digital age of speed, when we are being urged to think fast, act fast, and make split-second decisions.

This “act now or else” mentality puts one under undue stress – the consequences of which could far exceed that of a lost sale or other missed opportunity.

Frank Portnoy, author of the book, “Wait: the art & science of delay,” not only believes that technology is speeding up all our decisions in an unhealthy way, but he has also researched the impact of delay and has found that people are often happier and more effective in their decisions when they do delay – and even when they procrastinate.

I am not in favour of procrastination if you define it as putting off something that requires immediate attention. But there is nothing wrong with intentionally delaying something if you feel it would be to your advantage to do so.

It is important for us to think before we react so that we are at least aware of the possible consequences of our actions. It also gives us time to “cool down” (such as the case of replying to an infuriating email message) and to have peace about our decision. In other words, be effective, not reactive.

Being impulsive can cause problems – especially in this hyper-connected world where people can become addicted to speed.  Practising self-discipline, on the other hand, can improve over time.

There is nothing wrong with leaving something until a more convenient time if it is not imperative to do it now. That is simply intentional delay for a good reason. Do not put yourself on a guilt trip every time you do it.