How time is lost. 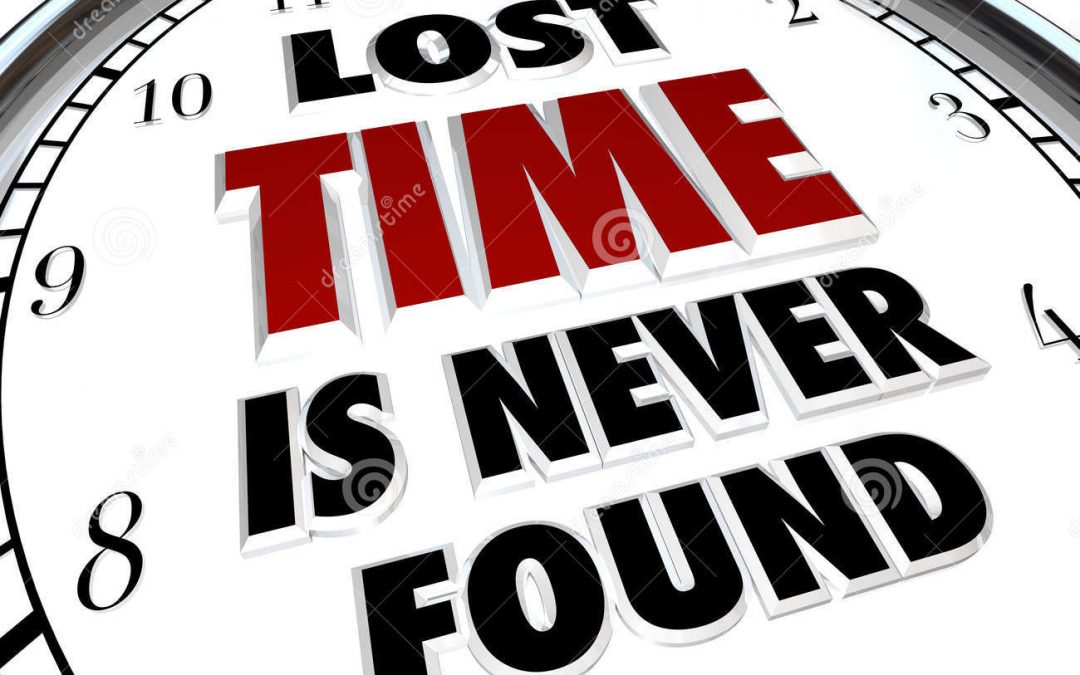 Microsoft Corporation’s study of people working found that on average, they were interrupted 4 times per hour, and a distracted worker takes nearly a half hour to get back to and continue a task. 28% of a typical worker’s day is taken up by interruptions and recovery time, according to Maggie Jackson, author of Distracted: The Erosion of Attention and the Coming Dark Age. And Peter Bregman, in his book 18 Minutes: Find your Focus, Master Distraction, and Get the Right Things Done, adds that 40% of the time they did not resume the same task once they had been interrupted.
A major cause of the interruptions seems to be a combination of smart phones and email. According to Mike Byster, in his book The Power of Forgetting, the average working professional spends roughly 23% of the workday on email, and glances at the inbox about 36 times an hour. According to research by Nielson, and reported in the book, The end of absence: reclaiming what we’ve lost in a world of constant connection, by Michael Harris, the average teenager now manages upward of 4000 text messages every month.
Research shows that social media users spend, on average, one and a half times more time online than the typical web surfer. S.J. Scott and Barrie Davenport in their book, 10-minute digital de-clutter, claim the average social media user consumes 285 pieces of content a day, which equates to about 54,000 words – the length of an average novel.
One third of wired Canadians use Internet-ready digital devices before getting out of bed in the morning, according to a poll conducted by Angus Reid/Vision Critical and reported in the Toronto Star.
Smart phones allow our jobs to follow us out the door when we leave the office. The portable devices allow us to receive and send email and phone calls around the clock. One survey of 1,908 workers, reference in Sam Geist’s Quick Bites newsletter, revealed that 51% of employees stayed in contact with work when they vacationed in summer. 80% left their cell phones on. And 63% said they kept in daily contact.
The ways an individual can consume time is unlimited. During a lifetime, the average suburban driver spends about two years stuck in traffic. Americans spend an average of six hours a week shopping, according to the book All-consuming Passion: Waking Up from the American Dream. And an article in the Rocky Mountain News stated that people spend about five years of their lives waiting in lines. This includes supermarkets, banks, post offices and motor vehicle offices.
But by far, the most time lost is through interruptions, most of which are caused by our propensity for being tethered to our smart phone and unable to resist the call of email. Our increasing sense of time urgency and tendency to multitask could also be catalysts for the interruptions that consume a huge portion of our day.
Regardless, we are the answer to our problem.
Initially, accept the fact that there will be interruptions and allow more time than you think the task will take when blocking off that time in your planner. A one-hour priority task, for example, might be scheduled from 9 AM to 10:30 AM as an appointment with yourself. If the task is expected to take longer than 90 minutes, break it into two 45-minute work sessions with a break in between. Huge projects such as writing a book or revising a procedures manual can be handled the same way — as a series of short work sessions scheduled on an ongoing basis.
Although you can expect interruptions, don’t initiate them or encourage them. During your scheduled work sessions you should ignore e-mail, and engage voicemail, put your smartphone on airplane mode, and even close the door if you have one. Return e-mail messages, phone messages etc. after your scheduled work session.
We also interrupt ourselves when we are suddenly distracted by an idea or thought or get an urge to do something else and so on. It is important to quickly jot these things down to clear them from your mind so you can continue to work on your priority task. One suggestion is to keep a small pad of sticky notes in your planner so you can quickly jot these things down and stick them on the day you plan to work on them.  Or even a steno pad kept handy. The important thing is to have somewhere you can park the idea so you can keep your mind on the task at hand.
If you can muster the self-discipline needed to keep on task, limit the times you check e-mail to 3 or 4 times a day, ignore incoming calls and email or text messages while working on your scheduled tasks, and have as much respect for your own time as you have for others, interruptions will be reduced drastically. And your personal productivity will increase.