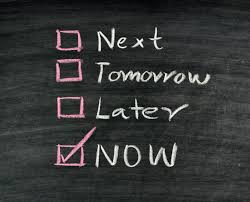 Reducing procrastination requires help from your brain
When we think of procrastination, we visualize someone rushing like crazy to get things done on time – risking mistakes, getting less than satisfactory results, and suffering undue stress and discomfort. But rushing to meet deadlines after delaying your start time is not the worst scenario. A much worse outcome results from delaying tasks that have no deadlines.
Leaving things to the last minute causes stress for sure; but it’s usually dissipated quite harmlessly when you eventually complete the task on time. And unfortunately many people even leave things until the last minute intentionally, thinking they work faster and better with an adrenaline rush, which simply isn’t true.
But the biggest problem occurs when there is no last minute. For instance, you may have life goals with no deadlines. You may want to write a book when you get time, or take a trip to Europe or revise your business brochure, organize your office and so on. If there are no deadlines, it doesn’t matter when you start – and quite often you never do. In this scenario the costs are horrendous – in terms of unfulfilled dreams, low self-esteem, a lack-luster life, and so on.
Recommendations abound on how to stop procrastinating, such as setting deadlines on all tasks, breaking the longer tasks into smaller increments, scheduling time for the tasks in your planner, setting reminder alarms on your iPhone, and working in a clutter-free environment. All are helpful; especially for those of us who have weak executive skills such as task initiation and response inhibition. These skills are required in order to avoid procrastination.
Children are especially prone to procrastination because their weak executive skills – those brain-based skills that mainly reside in the prefrontal cortex, take about twenty years to fully develop. The marshmallow experiments demonstrated this back in the sixties. A group of four-year olds were given a marshmallow and promised another if they could wait 20 minutes before eating the first one. Some children could wait but most could not. The researchers then followed the progress of each child into adolescence, and demonstrated that those with the greater ability to wait were better adjusted and more dependable and scored an average of 210 points higher on a scholastic aptitude test. Those who gave into temptation early on were more likely to be lonely, easily frustrated and stubborn. They didn’t cope well with stress and stayed clear of challenges. Yale University later conducted research on adults and found similar results.
The executive skills that are needed in order to wait for the greater reward include task initiation and response inhibition. It may explain why we tend to procrastinate on distasteful or overwhelming tasks and work instead on those brief and pleasant tasks, even though they may be less important. When we procrastinate, we are frequently putting off what we want most in order to get what we want at the moment.
But how were some of the few four-year-olds, who all had weak executive skills (since these skills were not yet fully developed) able to resist temptation and wait for the second marshmallow? Well, in examining the tapes many years later, researchers noticed that those children used strategies that allowed them to resist temptation – strategies that we could use ourselves in order to manage ourselves more effectively.  They all changed their environment in some way to offset their natural inclination to devour the marshmallow right away. Some put the marshmallow out of sight by sitting under the table or by facing away from the marshmallow. Others sang a song or hummed a tune, focusing their attention on something other than the marshmallow. They did something to avoid having to face the temptation.
So the suggestions normally given, such as reducing distractions and temptations by turning off your cell phone while working on a project, removing distracting photos or memorabilia and working for shorter periods of time before taking a break tend to compensate somewhat for weak executive skills.
But as adults, to be most effective in getting things done promptly and on time, we must maintain strong executive skills. And this includes continually exercising both physically and mentally, maintaining a healthy diet, getting adequate sleep, and balancing high-tech with high-touch, all of which are discussed in more detail in my ebook, Strengthen your brain’s executive skills, published by Bookboon.com.
Self-discipline is the rejection of instant gratification in favor of something better – a higher and more rewarding goal. Once you have written down your goals and blocked off times in your planner to work on them, you have a greater reason to resist the temptation to go wherever your impulses take you. The more you resist temptation, the easier it becomes.
Walter Mischel, in his book, The Marshmallow Test, suggests there is a limit to how much self-control we can exert before fatigue takes over, so don’t overwhelm yourself with too many goals. It took about 20 years for your executive skills to develop so it will take more than a few weeks to strengthen them.
Avoid goals that don’t excite you or you will be more vulnerable to digital distractions and the lack of mindfulness. Telling other people about your specific goals and making commitments rather than just voicing intentions have been known to help as well.
In my next blog I will discuss how to develop greater willpower.
Note: Books referenced in this article:
Mischel, Walter. The Marshmallow Test: Mastering Self-control. Little, Brown, 2014. Print.
Taylor, Harold. Strengthen your brain’s executive skills: Denmark: Bookboon.com, 2016