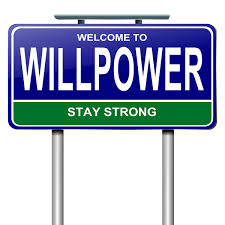 Developing willpower
There are different theories on willpower. Originally it was thought that willpower was like a muscle that was easily depleted. And research backed this up. But newer research also suggests we have as much willpower as we expect we have. If you believe you have the willpower to resist interruptions, you will have it. Sort of like the placebo effect.
This latter theory also seems to be backed up by research conducted at the University of Rochester as a follow-up to the marshmallow experiments of the 1960s. The original marshmallow experiments, referenced in my last blog article, were conducted at Stanford University by Walter Mischel, professor of psychology at Columbia University. He spent decades studying self-control. In the experiments of the 1960s, he monitored the ability of four-year-old children to resist a treat when left alone with it.  The children were given a marshmallow and told that they could eat it immediately if they rang the bell to summon the researcher; but they would receive two of the treats if they could resist eating it until the researcher returned, Some of the children were able to wait over 15 minutes and some even longer; but most could not. Those who resisted the longest, showing the greatest self-control, were more successful later in life. Long-term follow-up studies showed that a child’s ability to delay reward correlated with later academic success and adult income, as well as with the ability to tolerate stress and rejection.
The Rochester experiments, however, involved giving one group of children old used crayons and telling them if they resisted playing with them, they would be given new ones. But they never received the new ones. Another group was told the same thing but the researchers made good on their promise of new crayons. When they all took the marshmallow test afterwards, the group with a good experience behind them resisted eating the marshmallow for 12 minutes. The other group, who obviously had lower expectations, lasted only two minutes.
Although our brain hasn’t evolved recently, perhaps it doesn’t have to. We already have a brain capable of resisting temptation – although it may need strengthening – and we can still do a lot to remove the source of the temptation.
Removing the source of temptation could involve turning off your handheld devices while you work on priority projects, keeping the paperwork, to do lists and other distractions out of sight while working on a specific task, and leaving your cell phone at home if you decide to work in a coffee shop. You could also do all your priority work in the same place — one devoid of distracting scenery, pictures or paraphernalia so your brain gets to associate that space with work.
Resisting temptation might involve not going online or checking e-mail before 10 a.m., ignoring a ringing telephone when talking with family and friends, and resisting any urge to buy electronic devices that you really don’t need.
Self-discipline or self-control, focus, attention, prioritizing and planning are essential if we are to remain effective in this digital age of speed. These are all functions of our executive center in the prefrontal cortex area of our brain. That’s why I claim that the time management battlefield has shifted from the office to the brain.
When it comes to procrastination, it seems like our brain has a mind of its own. According to Esther Laandhuis, writing in the January/February, 2015 issue of Scientific American Mind, you can trick your brain into meeting any due date by thinking differently about deadlines. When we think of a deadline as something occurring in the present, we are more likely to begin the task.
For example, something due this week would be perceived by the brain as something more urgent than something due this month; something due this month would be perceived as being more urgent that something due next month, and so on – even though the actual number of days to the deadline are identical.
So a project due date of March 31st set on March 21st would prompt action faster than a due date of April 1st set on March 20th even though you had the same number of days to complete the task.
Research confirms this. One experiment, published in the Journal of Consumer Research, involved asking 100 students when they would start a data-entry task if they had 5 days to complete it. The ones who were assigned the task late enough in April so the deadline fell in early May were less likely to start the task right away compared to those whose deadline fell in March – even thought they had the same number of days to work on the task.
Since the brain seems to divide time into segments, we could use this fact by issuing assignments early enough so the deadlines fall in the same week, month or year. This might necessitate breaking the longer tasks or projects into shorter sub-tasks with shorter deadlines.
It might also suggest that making New Year’s resolutions might be best moved to the middle of the year rather than the end of the year so that the deadlines fall in the same year. After all, leaving a resolution until next year when you thought of it this year could be construed as procrastination.