Obesity can decrease your health & well-being 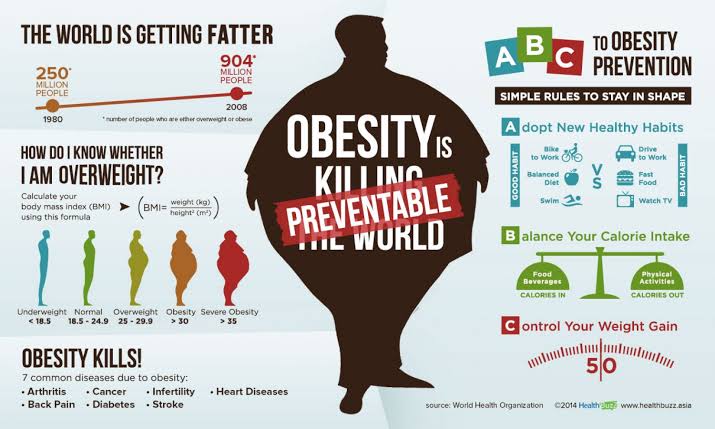 Obesity is killing us

More than a quarter of Americans depend on fast food, and over 30% of people consume some fast food on any given day. Americans spend over $134 billion on fast food each year, according to the October, 2010 issue of Psychology Today.
In 1995, no state in the U.S. had an obesity rate above 20%. By 2011, all but one state had an obesity rate above 20%. (Source: Globe & Mail, July 8, 2011). A CTV news program aired around the same time as the Globe & Mail article mentioned that Canadians consume an average of 700 calories per day more than we did back in 1970.
Skipping breakfast is no way to lose weight. Australian research reported in the June, 2011 issue of Chatelaine magazine indicated that kids who skip breakfast have a higher risk of heart disease as well as obesity.
Obesity is not good news. A study published in the journal Neurology showed that people who are obese in middle age have almost 4 times the risk of developing dementia later in life than those of normal weight. (Source: Globe and Mail, May 4, 2011). And you have an 89% lower risk of developing diabetes if you are not overweight or obese, (Source: Archives of Internal Medicine)
Adequate sleep is important when it comes to avoiding obesity. A study of 68,000 women by Harvard Medical School found that women who sleep only 5 hours a night are 32 percent more likely to gain 30 lbs. or more as they get older – compared to those who sleep 7 hours or more. (Even when the women who slept longer ate more, they still gained less than women who slept less.)
More exercise would help stamp out obesity. But only 5% of Canadian children and youth and 15% of adults are meeting physical activity guidelines according to Christa Costas-Bradstreet, a physical activity specialist with ParticipAction.
According to Statistics Canada, only 13% of Canadian adults aged 49 to 59 and 11% of those aged 60 and above meet the guidelines for moderate physical activity (defined as 150 minutes of moderate to vigorous activity per week in bouts of 10 minutes or more, in addition to muscle and bone strengthening activities using major muscle groups at least two days a week.
Exercise has many benefits besides weight control. For instance, studies conducted throughout the world indicate that your lifetime risk of dementia is cut in half when you participate in aerobic exercise on a regular basis. The risk of Alzheimer’s Disease is reduced by more than 60 percent. (Source: Brain Rules by John Medina)
To increase the amount of time in your life by avoiding obesity, it appears we should avoid fast food and junk food, watch our diet, eat a healthy breakfast, get adequate sleep, and exercise as much as possible.