A second look at multitasking 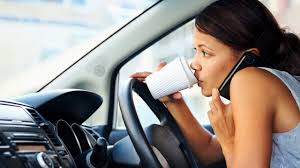 There are three types of multitasking. By multitasking, I mean the apparent simultaneous performance of two or more tasks. And since research has confirmed that it is impossible for the brain to fully focus on two things at the same time, all multitasking is not the same.
Let’s look at the three types or degrees of multitasking in reducing order of efficiency.
The first and most obviously inefficient, and potentially dangerous, form of multitasking involves physically performing two tasks at the same time – both requiring cognitive involvement – such as talking on a cell phone while driving through city traffic, or text messaging while listening to a lecture on safety procedures.
The second type involves working on only one task physically, while thinking about something else, such as planning your day while taking a shower or mentally rehearsing a speech as you collate reports or planning a dinner party while driving or worrying about finances as you iron clothes.
The third type involves what we used to refer to as a “utilizing idle time” — checking e-mail while a report is being printed or making a phone call while clothes are being dried or listening to information on your iPod while getting your hair done in a salon.
Only the first two are true multitasking, while the third one is simply making efficient use of time that might otherwise be wasted. This is not really multitasking and the worst that might happen is to forget to retrieve the printed page from the printer or forget to remove your clothes from the dryer.
Further, the seriousness of the second type of multitasking depends on the tasks involved. Daydreaming, while operating a machine or crossing in traffic is dangerous; but listening to the radio while taking a shower is not usually a problem. After all what’s the big deal if you miss the temperature report or forget to shampoo your hair.
In other words all multitasking is not the same, and much of it can be performed without serious consequences. But if you’re ever in doubt, the safest and most efficient thing to do is to err on the side of not multitasking. You can always use the idle time for rest, and relaxation, which most people don’t seem to have enough time for anyway.
The fact is, you generally do get more accomplished in terms of quantity when you multitask, regardless of the type. But the quality is not there. And there could be time-consuming – or even disastrous results.
Take a look at the diagram below. This diagram on the performance of simultaneous tasks was developed by Michael Posner back in 1978. Most of us come down pretty hard on multitasking, but the diagram does illustrate that even though the brain cannot actually perform two tasks at the same time, it can switch back and forth very rapidly between one task and the other – giving the appearance of simultaneous performance.
But in doing so we always have to sacrifice a certain degree of efficiency in the performance of each of the tasks. 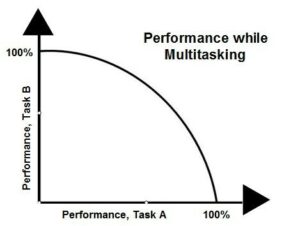 For example, if you are fully concentrating on “Task A”, depicted by the horizontal line, and ignoring “Task B”, depicted by the vertical line, you would achieve 100% performance on “Task A, and zero performance on “Task B”. But if you start to work on “Task B” as well, performance on “Task A” will decrease, following the curved line upwards and backwards.
As an illustration, assume at this moment that you are getting bored with my explanation of multitasking because you have heard so much about multitasking in the past, so you decide to check your email as you read. You immediately start moving along the curved line from the point where it meets the horizontal “Task A line towards the point where it meets the “Task B“ line.
As you become more and more interested and involved in checking and then responding to email, you hear and absorb less and less of what I am writing. Let’s assume you are about one-third of the way along the curved line. You can determine your degree of concentration on both tasks and your total performance, by drawing a vertical line from that point on the curve to the horizontal “Task A“ line, (which would probably show at about 85% if there were gradations on the line), and then drawing a horizontal line from the same point on the curve to the vertical “Task B“ line (which would indicate about 45%.)
So at that point you would be concentrating or performing about 85% on the reading task, and about 45% on the email task.
The good news is that by the time I finish this chapter you will have completed your email, and if you add the 85% performance on one task to the 45% on the other task, you would have actually performed at 130% by your attempt at doing two tasks simultaneously.
The bad news is that you may have made some glaring errors, beyond typos, when replying to your email messages. You may even have missed something important in this article on multitasking that could affect your own performance or that you could have passed on to your staff or others.
You have to be the judge as to whether any multitasking is beneficial or harmful, and that’s why I emphasized that there are different degrees of multitasking. Missing or misunderstanding what I write, or failing to provide a complete answer to an e-mailer’s question might not be important. But I don’t suggest you mentally rehearse a speech while strapping a child into a car seat.
The impact of irresponsible multitasking is now so obvious that it cannot be ignored. The Human Factors and Ergonomics Society estimates that 2600 deaths and 330,000 injuries are caused each year in the U.S. by motorists speaking on their cell phones while driving. Daniel J Levinson, in his book The organized mind, claims that multitasking also disrupts the kind of sustained thought usually required for problem-solving and creativity.
So if you decide to conserve time by working on two tasks at the same time, be sure to consider the impact of making a mistake or missing something. On the other hand, don`t be paranoid and sit idly by while a 50-page document is being printed. There could be a paper jam, but hardly as costly as wasting your valuable time.