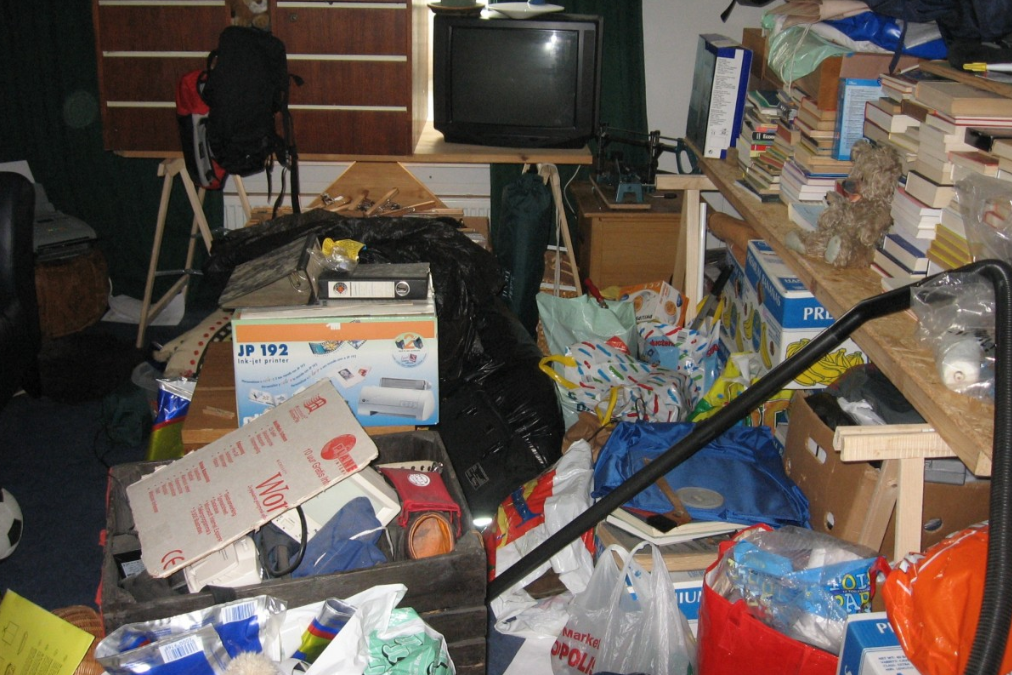 We are drowning in clutter and unneeded stuff!

Simplifying your life by getting rid of a lot of the “things” in your life is an important step towards getting organized and gaining control of your time. We are complicating our lives with all the stuff we buy and accumulate. Daniel Pink, in his book, A Whole New Mind, points out that self-storage, where people store the stuff they no longer have room for at home, is a $17 billion business. That’s larger than the motion picture business.
According to the Self Storage Association, the number of self-storage facilities has grown about 70 percent in the last decade. And what we don’t store, we just throw away. Ciji Ware, in her book, Rightsizing Your Life, claims that Americans are known around the world as the major consumers on the planet, generating nearly 200 million tons of household garbage a year. The U.S. spends more on trash bags than 90 other countries spend on everything. Think about that. The cost of the containers for our waste is greater than the cost of all goods consumed by nearly half of the world’s nations.
It’s no longer considered a luxury to own a car. But the U.S. now has more cars than drivers. And many purchases are not considered a necessity. Cell phones may be considered a necessity for many. But consumers spend nearly as much on decorative faceplates for their cell phones as they do on the cell phones themselves. And we insist on having the latest model. A statistic from the June 29, 2008 Toronto Star indicated that every year in the U.S., people toss out $80 million in metals alone when they trash their old cell phones.
There’s an excellent book called Your Money or Your Life by Joe Dominguez and Vicki Robin that describes a Fulfillment Curve. This curve is illustrated here. This curve plots money or possessions or “stuff” along the x-axis, or horizontal axis, and fulfillment or happiness along the y-axis – that’s the vertical axis. The more money you have to spend, the greater the degree of fulfillment – up to a point. After fulfillment goes through the survival stage, comforts stage and luxuries stage, it levels off. As you start accumulating more luxuries after the “enough” stage, your degree of fulfillment starts decreasing. In other words, once you have achieved what the authors refer to as enough, acquiring more simply makes you unhappier. It’s interesting to note that Daniel Pink also mentions in his book, A Whole New Mind, that while living standards have risen steadily decade after decade, person, family and life satisfaction haven’t budged.
Material things do consume a lot of our time. People spend their precious non-renewable resource, time, in order to acquire more money and possessions, only to discover that the possessions do little to further their enjoyment of life. In fact, possessions consume even more of this non-renewable resource. Not only does it take time to earn enough money to buy this stuff, it takes time to shop for it, learn how to operate it, maintain it in good working condition, repair it, upgrade it, insure it and use it. If we have to rent public storage, we have to sign a contract, pay rent, buy a lock, take trips back and forth to check on it or add to it, and so on.
It’s not surprising that the more we acquire beyond a certain point, the unhappier we get. We are afraid of losing it, breaking it or having it stolen. We frequently have to make payments on it, acquire more space to accommodate it, and worry about keeping the neighborhood kids or the family dog away from it. There also comes a time when we have to figure out how to get rid of it.
The more stuff we have, the greater the responsibility we have and the more opportunity there is for worry, anxiety and stress. It also complicates our life, causes clutter and distracts us from our life purpose.
This complexity can extend to our business as well. We can have too much inventory, too many receivables, too broad a range of products, too many styles, types, channels of distribution and so on. The years produce clutter and complexity that hinder goal achievement and profits. Just like the application of the 80-20 Rule, simplification is a key time management strategy that can be applied to all areas of life.