Unproductive? Blame it on your brain. 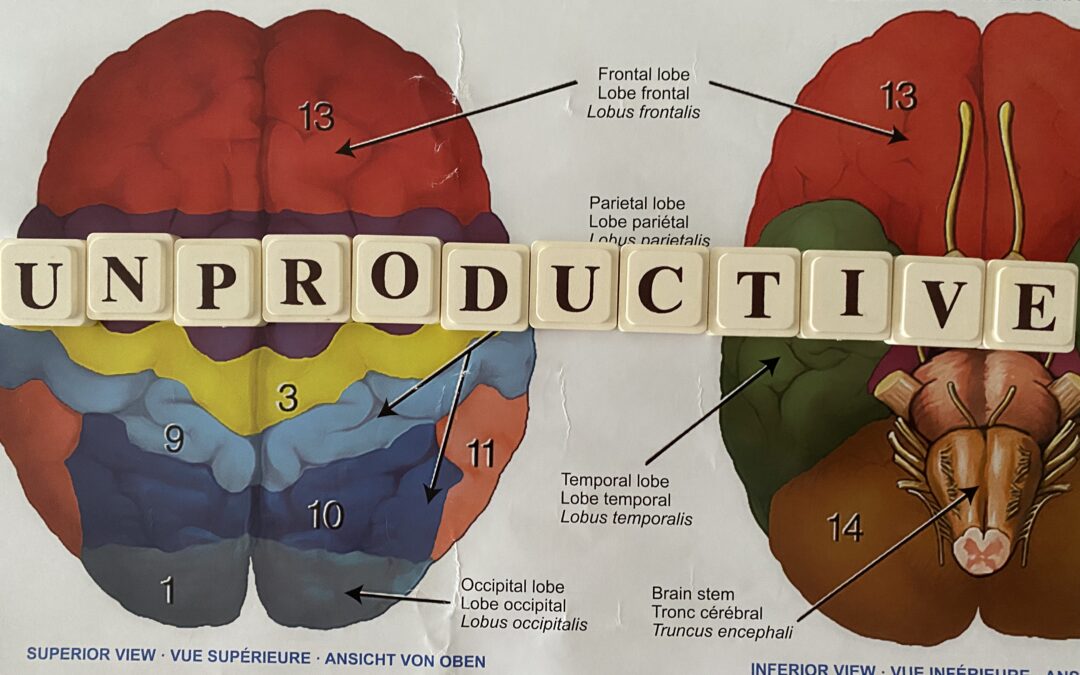 Thinking, planning, problem solving, and so on, all take place in the prefrontal cortex of our brain. which uses energy or metabolic fuel a lot faster than other parts of the brain. Therefore, making one important decision after another depletes your energy faster, and the decisions become progressively more difficult to make, and less reliable. You can’t make decision after decision without paying a biological price.

For example, a striking example of decision fatigue was illustrated when someone detected a pattern in a parole board’s decisions. The probability of being paroled fluctuated during the day. Prisoners who appeared early in the morning received parole about 70% of the time, while those who appeared late in the day were paroled less than 10% of the time. The mental work of ruling on case after case wore them down.

It’s similar with business decisions. You may not be aware of decision fatigue but it’s a fact that you become low on mental energy. The more choices you must make during the day, the harder each one becomes for your brain, and it looks for shortcuts which could lead to a reckless decision or doing nothing – avoiding making a choice altogether. Because of this energy drain, we probably procrastinate more later in the day. Also, focus will decrease, along with self-control. That’s why we should plan, make decisions, and work on the most important items during our prime time, usually in the mornings.

You must manage your energy as well as your time. A basic understanding of how your brain works will help you schedule your days in a way that maximizes your unlimited supply of energy. Just as you would not do strenuous exercises like push-ups all day, neither should you do all your heavy thinking work all day. Limit your deep thinking to 90-minute chunks of time, followed by half-hour sessions for light work, such as returning phone calls, e-mail messages, and so on.

Also, when making decisions, and too much information is available, the prefrontal cortex, home of your executive skills, goes into overload and you either don’t decide or you make a poor decision. In one study, grocery shoppers who were offered free samples of 24 jam flavors were less likely to buy anything at all compared to those shoppers who sampled only six flavors. And when people are given information on fifty rather than ten options in an online store, they choose lower-quality options. The main reason for this is the limited capacity of the brain’s working memory. It can hold about seven items; anything more must be processed into long-term memory.

Your prefrontal cortex holds your work-in-progress at any one point in time, including information just received or read, original thoughts and ideas, and any current plans and intentions related to those ideas. You don’t want to overwhelm your prefrontal cortex, so I recommend you jot things down as you go along. Once your ideas are in writing, the brain can release them as it does finished tasks.

Let me explain that last statement. Unfinished tasks can cause some anxiety since the brain is goal-oriented and likes to see things completed. It’s referred to as the Zeigarnik Effect, which states that your brain will remember and want to come back to unfinished work more than it wants to dwell on problems and tasks that you have already completed. Psychologist Bluma Zeigarnik was prompted to carry out research in this area by a professor who noticed that restaurant workers tended to remember details of orders being prepared, including who ordered what, but not those that had already been prepared and served.

That’s one of the reasons I recommend the opposite of what most time management trainers will tell you to do. They recommend that you ignore any e-mail messages, text messages, and voicemail messages that await you in the morning until you have completed your priority task. In addition to the fact that one of these messages might affect your priority task, such as a panic message from the boss telling you to abandon the project, the brain’s awareness that messages are there, and yet unresolved, causes anxiety and impedes your progress. I recommend that the first half hour or more of every morning be used to dispense with those messages, either by deleting them, doing them, delegating them, or scheduling time for them to be done later. Anxiety and stress both consume energy needlessly. Don’t complicate your day.