The year I got organized: a personal story of triumph over clutter. 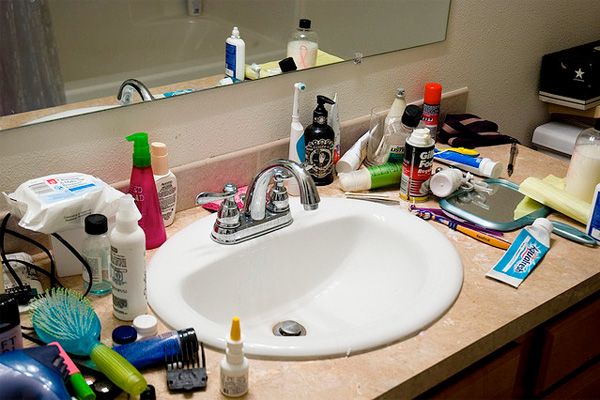 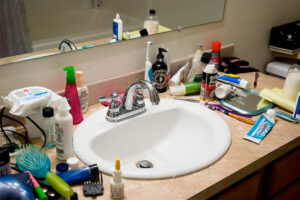 I have a little magnetic sign on my refrigerator that claims, “Organized people are just too lazy to look for things.” There is more than a little truth to that. I am definitely too lazy to look for things, and that’s what spurred me on to become as organized as possible. I find that looking for things is frustrating, stressful, a time waster – and definitely not good for inpatient people like me who have high blood pressure.
I also have learned that the fewer things I have, the easier it is to organize them – and of the less time I waste retrieving them. It’s fun to practice common sense. Do I really need nine pairs of shoes, four winter jackets, seven hats, four scarves, and so on filling the hall closet?
I know everyone’s situation must be different, but unless you’re a centipede, how could you possibly need more than four pairs of shoes? I cut the number in half for the hats and scarves since I only have one neck and one head. I allowed myself two winter jackets because the closet started looking bare
I can’t tell you how many pairs of shirts and slacks were crammed into the two bedroom closets – mainly because I kept losing count somewhere in the 30s. And I didn’t even attempt to count the underwear and socks. My mother would have been proud of me. I could wear a clean set every hour for a month in case I had to be rushed to the hospital – and still not need to do laundry.
It wasn’t easy to get rid of a lot of the stuff. Over half of the 30 odd pairs of slacks would no longer fit; but I still planned to lose weight even though I hadn’t lost any weight in the last 48 years. Quite the opposite. Sometimes you have to give your brain piece of your mind because it can be stubborn. I finally convinced it that if I ever lost weight I deserved the reward of a new wardrobe. Subconsciously I knew I would never have to deliver on that promise.  Once you’re on a roll, it becomes motivational. I even got rid of the tuxedo I borrowed from someone for the school prom back in 1953. I never could track him down and he probably went to an early grave wondering who had borrowed his tux.
I was further motivated when I became a regular hero in a small Mexican village that I visited several times a year. On each trip I would bring down a suitcase full of old clothes. The local “thrift shop” also benefitted and I started feeling really good about myself.
By the time I got to the kitchen, nothing could stop me. 62 glasses, 24 pots and pans – including in an egg poacher that never saw an egg in its life, a cast iron frying pan that I couldn’t lift let alone use, and hundreds of plastic bags stuffed into plastic bags – all went to a worthy cause. The 40-odd cottage cheese containers that I had carefully washed and were now still nestled inside one another on a top shelf out of reach went to the recycle bin.
Perhaps I went too far when I got rid of the one spare set of bedsheets and pillowcases; but I found I never used them. I wash the one set and return it to its rightful place on my bed. Sure, it will wear out sooner; but at least I won’t. I can always replace them with a new set when they wear thin.
I find that getting rid of stuff becomes a lifestyle. It’s a never ending; because people keep buying me things. So for every item I receive, I get rid of something less attractive – with the knowledge that it brings a joy to someone else.
I won’t bore you with further details of my assault on superfluous stuff. I’m sure you get the idea. I found it to be a necessary first step in getting organized. I’ll talk a little about my organizing experiences in my next blog article.